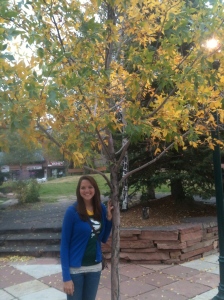 Surrounded by sagebrush, arid desert, and scrub grass, stood an isolated tree. Three cowboys atop low headed, weary horses, rode to its shade. It had been hours since they had seen life or water. As heat lines danced on the horizon, they stopped to rest in the shade of the lone tree. They dismounted and crawled underneath the sparse limbs and sat with their backs against the rough trunk of the tree. They tried to take deep breaths but the warm desert air prevented it. They tried to catch a nap but the bright sunshine found the holes in the canopy of the tree. They tried to spit but couldn’t pool enough moisture in their cheeks. It was one of those Southwestern days where there was no respite from the desert heat.

Sitting under the tree was a tarnished can of chew.  The first cowboy to see it picked it up to inspect it and out popped a genie (not to be confused with Baxter Black’s Genie in Hey Cowboy Wanna Get Lucky, however, it is possible the genies could be kin).  The cowboys took stock of this un-entombed paranormal entity.  By the observation of his disheveled appearance, threadbare boots, and unkempt clothing, the gene had taken the form of a rough-stock rider.

The genie pipped up: “I am a wish grantor,” he said to the trail weary cowboys. “I grant wishes. And since I usually grant 3 wishes to one person, I will grant 1 wish to each of you three.” The cowboys were astonished at their current fortune.

Immediately, the first piped up: “I want to be in a tropical paradise, with no work to do, and with a beautiful girl on my arm and my friends around me.” Poof! He disappeared from under the tree and reappeared in Cancun with all of his wishes granted.

Seeing his buddy gone, the second answered: “I want to be at a winter resort somewhere, away from this heat, with no work to do, and a beautiful girl on my arm.” Poof! He disappeared from under the tree and reappeared at Breckenridge, with a set of ski’s and a beautiful woman sitting next to him in front of a roaring fire as the snow fell outside.

The genie turned to the third cowboy and asked, “What is it that you desire?”

The third cowboy responded: “I wish my friends were here with me!” Poof! His two friends reappeared with him under the tree.

Some of the greatest meetings of all time happened underneath trees: Santa Anna’s surrender, Newton’s theory of Gravity, or Winnie the Pooh’s meeting of how to get him unstuck. In Judges 6 there is a great meeting that takes place under the tree of Ophrah.

It was there, under the tree in Ophrah, where Gideon was threshing wheat…[dramatic pause]…in a wine press. A little back story is necessary here. The Midianite’s came into the land of Israel like a “swarm of locusts”. The number of camels was so high that the Israelites couldn’t count them. So the people of Israel deserted their towns, ran in fear, and hid in caves.   But they still had to live, but when the Midianite’s found out the Israelites had food, they would take it. So the people of Israel had to hide the food they had.

Gideon was threshing wheat in a wine press under a tree. A wine press was a small hole in the ground where grapes would be stomped on. A threshing floor on the other hand, was out in the open, where the wind would separate the wheat from the chaff using the wind. So a winepress was hidden and secretive, and a threshing floor was open and vulnerable. Gideon was threshing wheat, a job for the open and in view of his enemies, in a wine press, a secluded place not conducive to being able to do his job. So our guy, Gideon, was too scared to do his job and wanted to hide his stuff from the Midianites.

Gideon, the scared farmer, meets and angel of the Lord, or the Lord Himself, under the tree that represents his cowardice, where the Angle says: “The Lord is with you Mighty Warrior!” The hebrew words [gibbor’Im] would be used later of David’s mighty men (2 Sam 23.8) and previously of hero’s of old (Gen. 6.4).   The word was used of great hunters, feared warroiors, and men of respect.   Gideion was…none of these. What has he accomplished when God called him “mighty warrior”? He threshed his wheat…in secret? He provided for his family…in quiet? He has done nothing “warrior-like”, yet God calls him this.   Could it be that God sees in him what he doesn’t even see in himself?

God looked at Paul, a pharisaic Jew and saw the world’s greatest Chruch planter. God looked at at Abraham and saw “the father of Nations” in a random face in Ur. Now God sees a great warrior in the heart of a coward, under the tree at Ophrah.

Trying to understand what God saw in Gideon is hard to understand because it was God who saw it. But if we look at the rest of Gideon’s story, there may be more to it than what we can originally comprehend. So what makes one of God’s “Mighty Warriors?”

God saw in Gideon, what he could have never seen in himself. God looks at us and sees our potential fulfilled, not our present state.   Back in Genesis 1, God created us to be “made in his image” (Gen 1.28-31) but disobedience and rebellion has marred and blemished our reflection of God (Gen. 3). Like a fractured mirror, the image is hard to see, but a rough outline can still be made out. We still posses a fuzzy image of God, but it has been made hazy by our sin. When we take a long look at who we are, sin, failure, and rebellion shows through.

When God met Gideon that day under the tree, Gideon saw his flaws as clear as day. He was from a weak family, hiding in the hills, struggling at his job, fearing for his things…but God calls him “mighty warrior”. Could it be that God saw in him what he didn’t even see in himself? Check the list of things that makes a mighty warrior above. Has Gideon shown any of them? Nope. In time of injustice, Gideon hid; he saw his flaws, God saw his potential; Worship wasn’t a priority; he’s threshing his wheat alone; being in communication with God went bye-bye a while ago; and Gideon really only fought for himself.   Not one quality of a mighty warrior was shown before the meeting at Ophrah. But God says: “Go in the strength you have and save Israel out of Midian’s hand. Am I not sending you?…I will be with you and you will strike down all the Midianites together!” (Judges 6.14,16) The math is simple: Gideon + God = Victory. Gideon has power and ability that he has never tapped into…God has a plan to use him to do what he never thought he could.

Could it be that God thinks higher of us than we do of ourselves? Somewhere in the history of Christian thought, we lost the ability to look adequately at ourselves. We know we should value human life (life begins at conception; every life matters) but we have a self-deprecating view of ourselves. Sure we are sinful people, with our own issues, that need to be looked at honestly, but we often extend grace to others while berating the person in the mirror. God loved us so much that he sent his son to die for us while we were messed up and blemished. God saw in us great potential to be not what we once were. Not a cowardly farmer, but a mighty warrior for the Kingdom.  We look in the mirror and see anger issues, drug dependence, a silent abuser, a liar, a thief, or an imposter.  But God sees the cross of Christ covering those things and a bearer of His image.  We see our problems, he sees our potential.

God sees in us, what we often don’t see in ourselves.  Gideon was taken from a cowardly farmer to a mighty warrior because of what God saw that he didn’t.