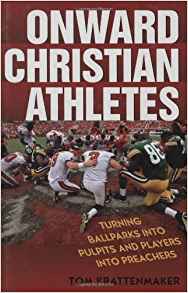 Throughout history, the line between the realms of the influence of sport and Religion are indistinguishable. Take for example the team names. There are the Anaheim Angels and the San Diego Padres; the New Orleans Saints and the New Jersey Devils. There are Crusaders and Demons, different kinds of Devils (blue, red, delta, sea, sun). Teams are named for offices and roles like: the Preachers, Ambassadors, Friars, Bishops and Parsons. There are some head scratchers like: the Meridith College Avenging Angels, the Elon Fighting Christians, or the Fighting Saints of Carroll College. Then there are some that reference individuals like the Ichabods of Washburn (whose name means “one who laughs at God”); the Johnnies of St. Johns (named after the exiled Apostle John); or the Gogebic Community College Samson’s (who was the tragic character in the book of Judges). It makes you wonder if they read the stories about these characters.

Then there are the mascots. Like the aforementioned schools that seemed to have missed the tragedy involved with their team nicknames, the Sacramento Kings mascot, Slamson the Lion, brings the same question up. Dont forget the Swinging Padre, who patrols the outfield of Pet Co. Stadium in San Diego Baseball games. He is portly, short, bald, and the verdict is out if he can throw, but he does have a very small strike zone. Dom the Friar is less cartoon and more creepy. The Providence Friar mascot was ranked the 5th creepiest mascot by the ForTheWin.com website蜉 narrowly beating out Sparky the Sun Devil of Arizona State.
The lines are blurred in the terminology. One of the most famous plays in the history of the game of college football is Doug Flutie’s “Hail Flutie” in the Orange Bowl. It received its name from the type of pass that it was, “a Hail Mary” pass that allegedly got its name from the implementation of it during a Notre Dame game in the 20’s which coincidentally sported the great Notre Dame backfield known as the “Four Horsemen”, Grantland Rice’s nod to Revelation. The greatest hockey game ever played was the ‘Miracle on Ice’ in the 1980 Olympics; a win over the superior Soviet team by an outmatched and outside US team. The great Steelers reception by Frank Harris was not the ‘Immaculate Conception’ but the ‘Immaculate Reception’. In 2010, Mega-church pastor, Rick Warren, literally took the mound at Angel’s stadium to preach an Easter Service to the 50,000 in attendance. He titled “the Sermon on the Mound” in an obvious reference to Jesus’ discourse in Matthew 5-7.

The lines are hazy when it comes to the buildings and stadiums. Old Texas stadium had an incomplete roof. The Cowboys would tell their visitors that the roof was left undone so that God could watch his favorite team play. Yankee Stadium, the 1923 edition that held up until 2008, was known as the “Cathedral of Baseball”. Cathedral, being latin for “seat” was where the Bishops sat at leaders of the Church, and the Old Yankee Stadium performed well up to that designation. There is the large mural, ‘Touchdown Jesus’ that graces the end zone at Notre Dame Stadium. If really pushed to the brink, the Atlanta Falcon’s opened up a new stadium in 2017 called Mercedes Benz field at the frugal price of $1.6 billion. But one of their main sponsors, Chick-fil-a, wont be open for any of their main tenants games. The Falcons play on Sunday and Chick-fil-a, due to religious reasons, are closed on Sunday. Money can buy the best and most technologically advanced stadium ever built, but not a chicken sandwich on game day.

The lines are fuzzy in what takes place at the events. At any church on Sunday morning there will be a few things that take place no matter what church is attended. Prayer has always been a pivotal part of the Sunday morning experience. As long as there are 120 lb men who decide the outcome of Sunday afternoon games by kicking a ball through goal posts, prayer will always be part of the NFL. There are fewer problems with it during the game, than there is afterward. Rick Reilly penned a piece for the back page of Sports Illustrated, which argued: “I don’t think when he fills his thermos and pays $10 to park, he’s looking to get proselytized.”蜉 He was arguing against the on field prayer circles organized by the players after games. If it’s a problem after the games, there are no shortages of issues that have been argued about starting a game with prayer. On top of the issue of prayer, there is a question of expression and the firestorm that was Tim Tebow. With scripture written in his eye black, prayer in the end zone, and his outspoken faith.

Sports aren’t going anywhere in society; but they are causing dilemmas for Christians. Growing up, I was told by a Sr. Minister: “Any sport that takes place on Sunday is sinful.” A youth minister once told me that hockey was unchristian because of the fighting involved in the game. I was chastised as a youth minister for watching the UFC with students. I was asked why, as a youth pastor, I didn’t challenge students to forgo travel teams and come to youth group instead. These are just a few of the challenges that face Sports and Faith, or for the purpose of this study, Christ and Culture. And there are so many more challenges that could be argued: public prayer, competition on Sunday, self expression and evangelization, and gamesmanship. That is just sports. What if the topic was work? What about entertainment in music, movies, TV? What about education, in public, private, or homeschool? What about politics, be it left, right, or middle? There isn’t enough pages to hold all the questions and answers about how Christ and Culture interact, but the discussion needs to take place. This study seeks to answer the question: how do I retain my faith in an ever increasingly antagonistic society. I recently read a book that dives into the question: what place should Christianity take place in the life of the modern athlete?  The review will follow here…